Meeting with CRT in May

A summary of the meeting by Mike Rodd and Anne Husar with Matthew Symonds and Rachel Hayward in May.

Facilities review: CRT anticipates that the first part of a consultation will take place later this summer and will cover minimum cruising distances between services (e.g. a five-hour cruising distance, but also take into account exceptions, such as high demand and services supplied by third party providers). It is also looking to run a trial on contactless pumpout payments on one waterway, but is not planning to provide composting sites for separator toilet waste.

Read more: Meeting with CRT in May

Although formed in 1991, last year’s pandemic distracted everyone from NABO’s 30th anniversary. Here’s a belated summary of some of the issues facing NABO 30 years ago.

Phil Bland and Jon Darlington formed NABO, joining forces with Syd Beacroft and Dave Green, who had called a meeting to form a boaters’ organisation. NABO’s first open meeting, on 25th August was in Dudley and was an overwhelming success, with 69 boat owners joining on the spot, bringing the initial membership to over 130. Speakers from the floor said they did not feel that anyone had hitherto been prepared to listen to the views of individual boat owners.

The Broads and canals – they are not the same …

The Broads and canals – they are not the same …

Mark Tizard is getting used to his new boating environment.

Hire craft on the Broads seem to have got larger and ever more sophisticated, with two decks. I wonder if the hire market has peaked, with prices ranging from £1300 to £3300 a week, with most at the upper end in the main holiday period. I have noticed an increasing last-minute availability of boats; a quick check shows many are still available to book. Hirers report now having to pay a fuel surcharge rather than getting money back from the deposit as in previous years.

Read more: The Broads and canals – they are not the same … 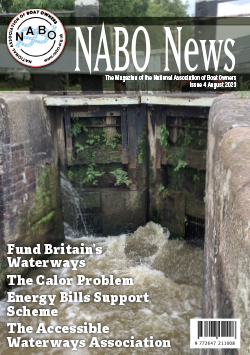 NABO News back copies are available to read by non members. See this link for the library here

The latest colour edition of NABO News is only available online to NABO members who have registered on the website. Members can log in and then open the pdf file on the Members/NABO News latest edition menu link. That gives NABO members advance access to our flagship publication, even before it drops through the letterbox.

If you are not a member, you can peruse the contents here and see what you are missing.